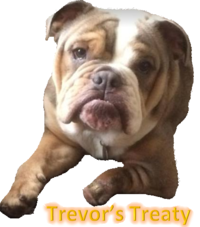 THE TREATY IS NOW CLOSED TO SIGNATURES

2,025 people signed the letter and 15 Breed Clubs and Rescues joined the Treaty. The letter has now been delivered to the kennel club

Trevor’s Treaty was born from the arrival of Bulldog Rescue’s first seriously deformed Lilac Bulldog called Trevor and launched at Crufts in 2019. Realising that the sudden increase in dogs bred purely for colour over health was creating a problem of its own, we realised that something had to be done to not only educate the public about this current fashion trend, but also ask the Kennel Club to rethink their current registration system

The Kennel Club have always maintained that the registration of dogs considered “Colour Not Recognised” (CNR) was not a problem based on the fact that there is no proven evidence to suggest coat colour could have an impact on health (with the exception of Merle). But by enabling registration of these pups has encouraged the breeding of dogs classed as “Rare” endorsed by having the term “Colour Not Recognised” on the registration document. In turn this has meant that the breeders of these dogs can then go onto charge 2, 3, 4 and sometimes 5 times the price of a standard colour bulldog.

In fact we have seen Standard colour bulldogs registered as CNR dogs simply to inflate the selling price and it is our opinion that until DNA profiles are required at registration there is nothing that can be done to change this.

The breeders of these dogs have no other thought over the mating except what the colour of the pups will be. On the one hand the Kennel Club are promoting Health testing and making commitments to the media about how they are committed to improving the health of the Bulldog by investing in and supporting various health testing schemes BUT none of this matters if our gene pool is being contaminated by unhealthy dogs bred for profit by breeders who have no intention of undertaking any form of health testing or to comply with the breed standard.

Many of these litters will have Standard Colour pups within them, these dogs are out there in the gene pool and as the numbers increase the health tested dogs will soon be outnumbered.

As a breed we cannot fight the health argument if the Kennel Club continue to allow the registration of dogs bred purely for profit.

So what are we asking?

The kennel club have already said they will not stop registering them so we are asking them to use some of the increased registration revenue to help us pay for the increase in badly bred and now deformed dogs coming into the rescue system.

Black, Black and Tan, Blue (or Lilac) and “Dudley” (ie no black pigment) occur naturally in the bulldog but they don’t naturally occur very often. The very first breed standard written in 1865 allowed these colours but by 1902 They were written out and considered undesirable and as the standard has been altered throughout the years the undesirability of these colours has never changed. But it is this wording that encourages breeders to class them as “rare” because they can still supply a Kennel Club Registration document at the point of sale.

2025 people signed our letter? THANK YOU

Full report by Ms Smith can be downloaded here: BulldogBreedRecords2018.pdf

Since the launch of “Trevor’s Treaty” at Crufts in 2019 Cassie Smith has put together a “2018 Registration Statistics” for the Bulldog. These figures have been taken from Breed Record Supplements AV1 to AV4.

The report starts by correcting a number of incorrectly registered bulldogs and states that:

Pedigrees seen by Bulldog Rescue would suggest that there are more than just the one incorrectly registered standard colour registered as CNR as in doing so the selling price of the pups can be inflated.

What’s interesting is that from the 1102 standard colour litters and 1035 CNR registered litters the number of pups bred were exactly the same with 5223 pups produced in both cases. This in itself is an issue as it shows the extent in the rise of litters bred for colour. There was a time when no pups would be registered CNR – anyone that had a black throw back in a litter would give it away to a pet home and there were no Blue’s or Lilacs bred – not even accidentally – so to now see that the CNR pups are in equal numbers to standard colour pups is a major worry in itself.

Skipping through to the health testing section of the report which concentrates on HUU testing and the Breed Council’s Health Scheme (measured Bronze, Silver and Gold) it’s also interesting to note the following:

The Breed Council testing give a slightly less accurate figure as the scheme only allows CNR dogs to only go to Bronze but the Standard Colour litters had 6.5% where both parents were in the scheme and 43.7% with one parent

CNR litters compare with 0% having both parents in the scheme and 1.99% having one parent.

Although it is clear from the dogs seen in Rescue, CNR pups are very obviously only bred for colour over health, the above health testing figures confirm this.

The report also details the average age of breeding dogs and knowing that CNR is a current fashion trend the need to use young dogs to get litters before the trend wears off or the Kennel Club act is also paramount.

(*COI = Coefficient of inbreeding and is expressed as a percentage probability of the same variation being inherited from the sire and dam. A lower percentage indicates a lower level on inbreeding. Many imported dogs only have a three generation pedigree so the lack of pedigree information may reflect the lower percentage figure on CNR litters)

So in summary, the report shows the very worrying increase in the breeding of dog’s purely for colour with evidence that very little thought is given to the health of the offspring and that zero health testing is done on the parents prior to mating.

Bulldog Rescue feel that this has qualified the reason behind Trevor’s Treaty and backed by their own figures continue to call on the Kennel Club to help us deal with the fall out.

Why does this matter?

Asking the kennel club to help us deal with the increased costs involved in running a breed rescue that is suddenly inundated with CNR dogs has nothing to do with the colour of the individual dogs. It does, however, have everything to do with the health of these pups and the damage it is doing to the health of our breed in general. The dogs have not asked to be born and as a Kennel Club registered breed rescue we are bound to helping them but they are costing us a fortune.